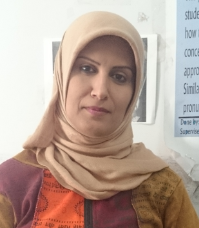 Country of your Institute / Work: Iraq

Profile: Nawal Fadhil Abbas got her PhD in English Language and Linguistics in 2014 from Universiti Sains Malaysia and now she is teaching at the College of Education for Women, University of
Baghdad. Her fields of interests include but not limited to Pragmatics, Critical Discourse Analysis, Critical Stylistics and Corpus Linguistics.

Vagueness and Withholding Information in Christie’s (1926) Detective Fiction The Murder of Roger Ackroyd: A Pragma-Stylistic Study

This study is intended to examine the deceptive strategies utilized in the well-renown Agatha Christie’s (1926/2002) detective fiction The Murder of Roger Ackroyd to fill a gap in the literature by conducting a pragma-stylistic analysis of the novel. To do so, the researchers have set two objectives which are phrased as follows: firstly, examining the… more

YouTube is not just a platform that individuals share, upload, comment on videos; teachers and educators can utilize it to the best maximum so that students can have benefits. This study aims at investigating how active and influential YouTube can be in the educational process and how it is beneficial for language teachers to enhance… more

The increase in the number of terrorist attacks especially the shocking event of 9/11 led to wide coverage of topics such as terrorism and extremism. Such coverage is not only conveyed by the media and newspaper articles but also by creating novels. As such a result, the current study focuses on extremism as a concept… more

Fossilized Use of Active and Passive Simple Present by Iraqi M.A. Students

Interlanguage fossilization is a crucial dilemma that foreign language learners may fall in. The problem of the present study is shown clearly in the answers of Iraqi students of Master of Arts in the College of Education for Women University of Baghdad. In spite of all the previous years of studying English language, some still… more

The present study has two aims: First, to investigate the way knowledge has been expressed in relation to the negative representation of the two categories, namely, immigrants (especially illegal ones) and Syrian refugees, in two of Donald Trump’s pre- and post-presidential speeches. Second, to examine the local ideologies that can be identified in relation to… more

Politeness & Interaction in Goldsmith’s She Stoops to Conquer

Politeness is best expressed as the practical application of good manners &etiquette. It is a culturally defined phenomenon and what is considered polite in one party can often be quite rude or simply strange in another.  In language study &according to Richard (1985:223) politeness means how languages express the social distance between speakers and their different… more

Pragmatics and the Teaching of Literature

Scholars have been working, for decades, on examining literary discourse via new techniques among which pragmatics. Accordingly, and within a pragmatic appreciation, it can be suggested that literature constitutes a speech act on its own at the global level functioning as a macro-speech act. At the same time, the literature can be seen as a… more

The speech act of promising is considered as the most influential strategic device to sway the hearers to the speaker’s point of view, and it represents a prerequisite to a successful interaction among individuals. It is studied to investigate how people use it as a functional unit in communication. In other words, to understand how… more

Divorce as a Performative Speech Act: A Cross-Cultural Study

In the past few decades, there has been a growing interest among scholars and researchers in applying pragmatic tools, primarily developed in relation to spoken interaction (Black, 2006), to literary discourse; an interest in the whole texts and their communicative functions and uses in particular contexts (Short, 1995). It is growing simply because most of… more

Overlap of Meaning: Praise and Flattery in Austen’s Pride and Prejudice

The Search for Identity in Online Chat

Internet communication is one of the most important applications of the 21st century. College students are among those who make use of this activity for both academic and personal interest. Students usually vary in their use, appreciation and response to this widely used activity. Accordingly, the present research paper aims at answering the following questions:… more

Linguistic politeness has been shown, over the last few decades, to be a successful device for studying literature linguistically. In addition to establishing and asserting identity and achieving goals, linguistic politeness is a means of studying social interaction to establish social, harmonious and friendly relationships among interactants. This study aims at investigating Anne’s social interaction… more

Several contributions, in this century, revolve around the role which pragmatic plays in the perception and understanding of a humorous language. Pragmatically, linguists are interested in the way humor is communicated in conversations of our daily life and in the function of humorous communication like; irony, pun, teasing and joking. Only, recently, humor has gained… more

The strategies of politeness are not arbitrarily chosen by speakers in interaction. Instead, the choice of a strategy is constrained by a number of contextual features (socio-cultural variables), such as the relative power of the speakers, the social distance of the speakers and what the speakers happen to be negotiating at the time of speaking.… more

Pragmatics of Impoliteness and Rudeness

There is a great deal of overlap between the two concepts of impoliteness and rudeness. Despite the fact that both refer to the offensive behavior, there is a main difference between the two terms. This paper is devoted to reveal that difference, which is a matter of intentionality, clarifying which one of them is intentional… more

Pauses and Hesitations in Drama Texts

Pauses and hesitations are phenomena that can be found in speech. They can help both the speaker and the hearer, due to the functions they have in a dialogue. Their occurrence in speech has a value that they make it more understandable. In this regard, the researchers intend to critically examine the pauses and hesitations… more

The present study is intended to critically examine metadiscourse markers in 24 master thesis abstracts. Twelve of them are written by non-native Iraqi female students and the rest by native American female students. To do so, the researchers have set two aims: examining the types and subtypes of metadiscourse markers in terms of nativity and… more